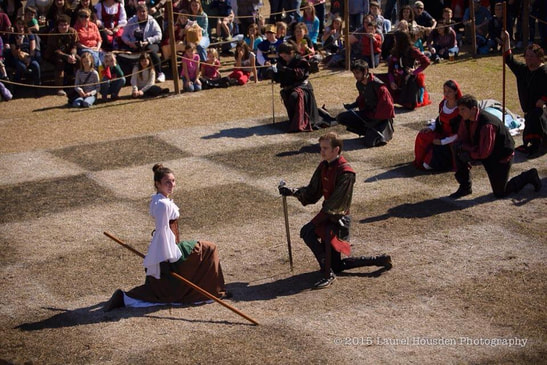 Cast members take their places during the opening moves of Thieves Guilde's chessboard at the Hoggetowne Medieval Faire in 2015. Photo courtesy of Laurel Housden.
Hoggetowne Medieval Faire is Thieves Guilde's signature showcase. It is our premier show and one we take great pride in performing. We have performed shows about Robin Hood and his band of Merry Men, brought King Arthur and his noble Knights of the Round Table to life and even recreated the War of the Roses on occasion.

The Faire is a grand, three-weekend affair. There may be just seven days in the spotlight, but preparation begins much earlier. About eight months before the show, Guilde and the city of Gainesville decide on a theme for the next faire. Auditions and training are held once summer ends, allowing for the greatest number of residents to come out and be a part of the next year's show. Training and costuming continue for around three months, leading up to the dress rehearsal of our show. A week after dress rehearsal, the Hoggetowne Faire begins. Then the cycle resets, and we do it all again.

Currently, Thieves Guilde produces three stage combat shows each day. In addition, we also perform the opening gate scene each day when the faire opens and patrons take their first steps into the medieval land.